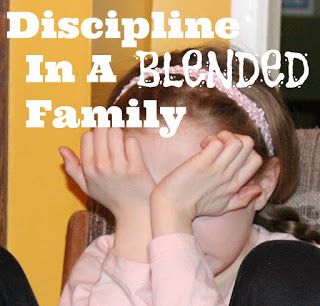 For any new blended marriage, I would recommend not getting involved with the disciplining of your stepchildren within the first couple of years into the relationship; leave that to your husband.  The reason why I am saying is, is because the stepchildren need to respect and trust you in their life. The stepchildren need time to first develop a warm and friendly interaction with you.  Once the foundation of respect and affection is established, then stepmoms can slowly attempt to be an authoritative parent to the stepchildren.  If you do it too early in the development of the relationship with the stepchildren it could result in a bad relationship which is sometimes very hard to recover from.  Children often never forget things that happen early on in the relationship.  So it’s best to leave the discipline to your husband until you have established a close positive relationship with them.
Early on in my marriage with my husband, I made the mistake of trying to step in and help my husband who was having trouble disciplining my 11-year-old stepdaughter.  My stepdaughter kept pushing my husband and yelling at him trying to get her away about playing with some neighborhood kids in which we said they couldn’t play with because the kids were just not good kids for them to play with.  She kept arguing with him and I was right there trying to let him handle the situation but I can clearly see he was getting worn out from it all and he wasn’t making any headway with her.  So I stepped in which I totally regret to this day and told her that her Dad said No, you cannot play with them, this needs to stop because he’s not changing his mind. No means no, is what I told her.  Well, she stopped yelling and looked at me and gave me the middle finger.  When she did that it totally shocked me and told me she doesn’t have to listen to what I say. I didn’t even know what to do or say.  My husband then told her to go into her room.  She ended up going back to her mother’s house for the rest of the weekend as punishment.  However, she never once had to apologize for doing what she did.  The next time I saw her, she just acted like it never happened.  It was very hard on me when it happened.  My husband apologized to me for her behavior that day.  After that day happened it seemed our relationship meaning my stepdaughter and me just took a turn for the worst and things were different between us.  I will always regret stepping in like that and I should have walked into the house and let him deal with my stepdaughter, but I wanted to help him out, but it only ended up hurting me.This is a good example of knowing when to say something or when not to say anything. Since it was our first year into the marriage, I should have let him handle it until I had a good solid relationship with my stepdaughter. Then later on after a year or two there were some other times that I stepped in and said something only to help my husband out that I regretted doing. After a few years into our marriage, we finally came to the conclusion that it was best if he handled discipline with his own kids and I would handle my kids.  It’s best that in the first few years to maintain an emotionally non-threatening, distant relationship is key for the stepparents.  After a couple of years, stepparents can begin to be more involved in the rules settings and discipline area. When that time is right, it should be agreed upon between both you and your husband until then try to enjoy being the “cool” stepmom.  Because with discipline they tend to forgive their Father about it more easily than they will forgive their stepmom for disciplining them. The relationship between you and the stepchildren is always on a rocky road the first two years that is why it is very crucial that you leave the discipline area up to your husband. It’s very hard to recover if you step in too soon and start disciplining your stepchildren.  Sometimes your relationship doesn’t ever recover after you have overstepped your authority to early with your stepchildren.  With that being said, you should never be alone with your stepchildren during the first year of marriage, that way to avoid having to be the disciplinary in the house. The ability to lead and influence stepchildren comes the old fashioned way.. you earn it! (Ron Deal; 2002) With that, it takes time just like any new relationship.  You need to build that trust, respect, and honor from them, there’s no quick way to get it either, everything takes time to grow and mature. 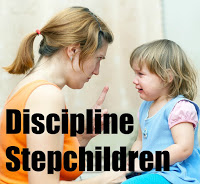 Discipline in a blended family can be very hard and it requires a lot of letting go of your own ideas of control. First you need to realize that you have no control over what goes on in the other home. Your rules are different than the rules at the other house and there’s nothing you can do about that. Don’t expect them to follow your rules over at the other home and don’t get angry about it, you need to let it go.
When it does come time to discipline you and your husband should negotiate rules together behind closed doors and must always seek unity in every decision.  Makeup consequences of when a rule is broken and follow through on it and be consistent.  When giving the “house” rules as I would like to call it make sure you do it together and say that you both came up with these rules together.  But each of you has to take the lead role with their own children.  You cannot have two separate set of rules for the children and stepchildren.  All of the rules need to be the same across the board.
If you don’t agree with the way your husband is disciplining your children or stepchildren, do not say something right in front of the children or stepchildren.  Wait until you can get the time to go behind closed doors and talk with them about it.  If you talk in front of the children or stepchildren they will most likely hate you or think that your parenting is weak between the two of you and end up using it to their advantage. Discuss the circumstances often with one another and work together to make changes over time if need be.  What we have done is post a list of the “house” rules on the fridge along with the consequences that way they know what they are because having two sets of rules for both houses can be confusing at times for the all of the children.
Have you ever had issues with getting involved in the discipline too soon with your stepchildren?

Stepmom for 19 years overall, married for 10 years. I have three of my own children and three stepchildren who are adults now. View more posts